What does the Tragic Shooting in Florida tell us?

For those of us whose children were or are suffering from mental illness – what can we draw from the horrific events in Florida?  Our children have not engaged and will not engage in violence.  Indeed most children with mental illness withdraw and do not engage.  I am certainly not commenting on gun control either. But the fact is that the mental health system failed Nikolaz Cruz.  Now, I have no doubts he is guilty and he deserves the punishment that the law will meter out.  But I ask-was there a point in time he could have been saved and thus the lives of those 17 human beings could have been saved as well?  Of course, I do not know the extent of his mental illness, nor do I know every aspect of his life that added to his emotional downfall.  But I do know that schools, doctors and counselors often have no choice but to fail.  Whether the failure is grounded on lack of funding, lack of knowledge, lack of dedication, fear of getting involved, fear of getting sued or any other reason, many mental illness stories end badly.  His school saw the signs and did little.  His therapists gave up when he stopped showing up.  His community turned a blind eye and I need not mention the monumental failures of law enforcement.  I can tell you if he was suffering from cancer there would have been a team of  doctors treating him.  They would have developed a plan and followed through on it.

But, because he was mentally ill, he was left to his own devices and we know the result.  Often our children with mental illness, despite the herculean efforts extended by their parents are also left to their own devices.   The end result for Nikolaz Cruz is now a matter of history and the lives of those touched by his anger will forever be changed.   Although different, the life of a parent who loses their child to mental illness is forever changed as well.

Our society has so many issues it is a fool’s errand to think we can change them all. So let’s start with looking back as to what may have prevented the illness or helped Nikolaz Cruz live with it and in doing so, might have saved the lives of the 17 and the thousands who are forever changed by their deaths. 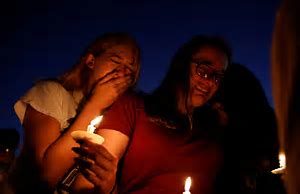 Why Is It That Psychologists, Pediatricians/Primary Care Physicians and Psychiatrists Do Not Coordinate Their Care?

We all need to spread the word that we can make a difference in our children’s lives if we agree to help them at the earliest possible moment so their fears and worries do not overcome them.  Please share your thoughts, because we are all in this together and through unity of purpose there is strength.